The History of Tauberkraft GmbH 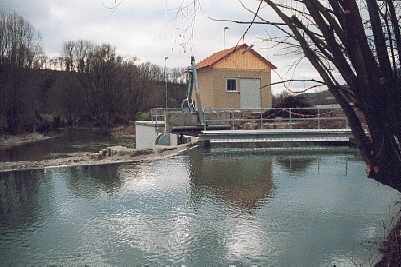 The "Tagungs- und Bildungsstätte Vorbachmühle Weikersheim" invited some people from southern "Main-Tauber-Kreis", who are known to be interested in social and environmental issues to a brain-storming on March 5th, 1994. "New labor for rural regions" was the title of this meeting. The protagonists refused to accept, that a growing number of men were socially marginalized by unemployment in their country.

The participants of this brain-storming produced many good ideas including the chance to create work by producing electric power without pollution. It should be a long way from first idea to realization, but this meeting could be called the beginning of "Tauberkraft GmbH".

There have been many small hydrogenic power plants at the river "Tauber" and his tributaries which were shut down during the last decades because lack of profitability. The idea to reactivate one or the other of them was favored by the participants of the brain-storming session. There already was some experience with hydrogenic power, because Vorbachmühle Weikersheim uses a turbine plant to heat their building. But none of the participants ever created a company or recruited investors.

First of all, the group looked for models from which they could learn. It should afford many more meetings until the contract for the company was ready and ten associates where found, who created the "Tauberkraft Energie und Verkehr Verwaltungs GmbH" on July 12th, 1999.

Simultanously to the founding of their company the group searched for the best site for their project. The river Tauber has little fall and a small amount of water most of time. A hydrogenic power plant is profitable either with much water or great fall. Therefore the site had to be chosen very well. Many places were considered and rejected for economic reasons until Schäftersheim was selected.

There already was a dam in Schäftersheim. A hydrogenic power plant of the "Überlandwerke Schäftersheim" at the same place was disassembled long ago. Tauberkraft GmbH had to build the plant only. For this reasons Schäftersheim was the best choice for Tauberkraft GmbH. "Münstermühle" from Langenau was a good partner who planned and realized the project. The new idea of this company to use prefabricated concrete construction for a hydrogenic power plant made the investment economically possible.

Construction plans were ready and Tauberkraft GmbH applied for the building permit in July 1998. The building estate was bought and a cable layed so that it would be possible to connect the plant with the net. Now there was a good chance to realize the project. The chance grew up when the company got the building permit in late December 1998. But there still was a great obstacle, the calculated costs of 700,000 Marks. Almost half of it had to come from the company, the other half could be got by credit. The members of Tauberkraft GmbH were not able to spent so much money. Support was needed.

With the building permit and in certainty, that the hydrogenic power plant could be realized, Tauberkraft went to the public. They searched for supporters in an information event on January 22nd, 1999 in Schäftersheim. Their professional presentation was convincing. At least about 60 compagnions were found who gave money for the hydrogenic power plant. A credit was not longer needed. But the company did find more than share-holders. They found interesting people who are supporting the idea of the project too. One of them pointed to a new support-program of the german government for the usage of sustainable energy sources. This program was ideal for the project. To get the grant the plant had to run on November 15th, 1999. This requirement could be matched because all plans were ready, the building permit was given and the construction time was short due to the prefabricated concrete construction. With the non-bureaucratic aid of "Bundesamt für Wirtschaft" the hydrogenic power plant Schäftersheim is working now.