Construction of the plant

Tauberkraft GmbH applied for the building permit in July 1998. It was given in late December 1998. 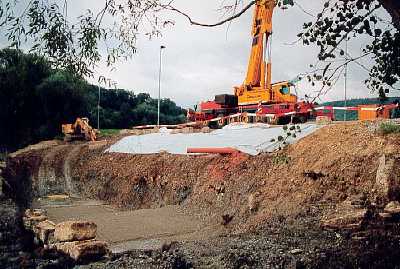 The underground work at the dam near Schäftersheim started in summer 1999. The excavation began after the building site was dryed by erecting a temporary dam. On Tuesday 17th of August the prefabricated building should be delivered. All pepairing work was done in time. The excavation was ready. A heavy mobile crane (250 tons) from Neckarsulm arrived exactly at 6 a.m. in the morning to lift the building to its destination. The crane was brought to his correct position (see picture left). 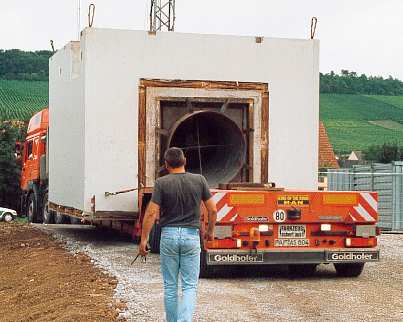 The heavy vehicle from Ingolstadt, where the concrete containers have been prefabricated, with the turbine building was announced for 8 a.m. But there were some unexpected difficulties. The building was to big to pass a bottleneck in the nearby town Röttingen. The transport had to go a roundabout way over Riedenheim and Nassau. It arrived at the destination with a delay of 2 hours at 10 p.m. (see picture right).

Another bad surprise emerged, when the crane tried to lift the turbine building. Its weight was 10 tons higher than calculated. This was to much for the crane. A bigger one could come a week later in best case. But the team managed this problem too. To reduce weight they disassembled the turbine and positioned the building without it. 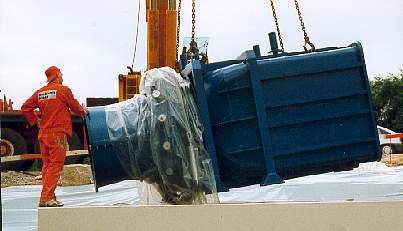 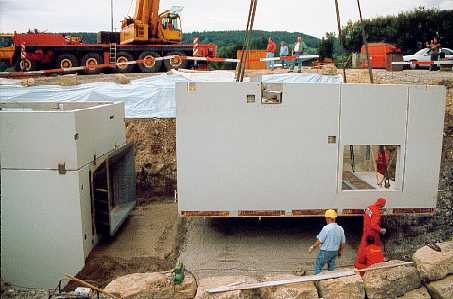 The photo shows how the prefabricted concrete-container for incoming water is added to the turbine building. Using this new technology the construction time for the hydrogenic power plant was reduced to three month, an extraordinary short time. Fortunately the weather was dry and the level of river Tauber was very low during construction of the hydrogenic power plant.